With $1.3 bn raise, Mukesh Ambani is now 5th richest in the world. 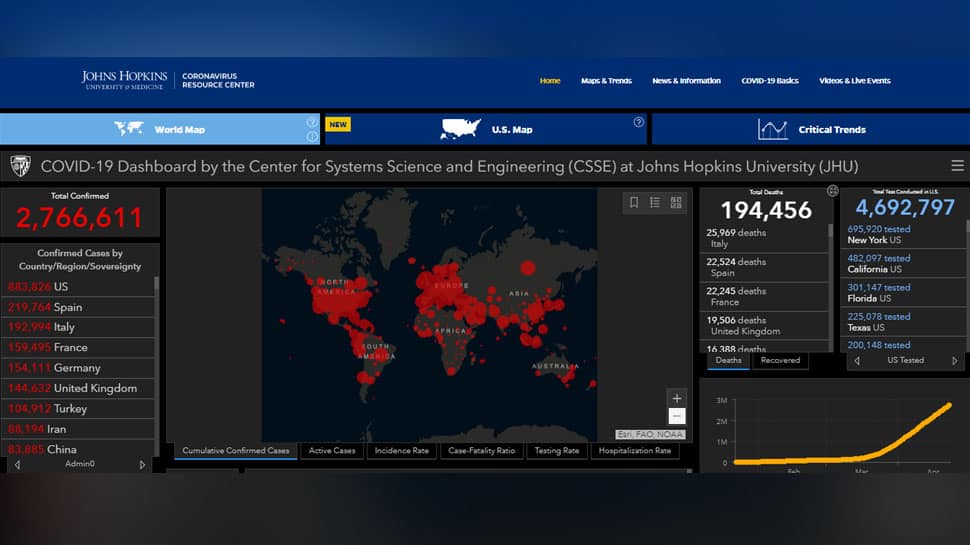 The US Food and Drug Administration has cautioned against the use of malaria drug hydroxychloroquine, touted by President Donald Trump, in COVID-19 patients outside of hospitals and clinical trials, citing risks of serious heart rhythm problems. The decades-old drug has been called a “game changer” by Trump in the fight against the novel coronavirus and anecdotal reports that it may provide some benefit have spurred sales of the drug. There is no evidence yet of the drugs` effect on the virus.

Within hours of Trump`s initial endorsement on March 19, pharmaceutical supply chain experts reported shortages as doctors began prescribing hydroxychloroquine for themselves and their families. Patients have also pressured doctors to use the therapies widely touted by Trump and other supporters. The FDA said on Friday it was aware of increased use of hydroxychloroquine and chloroquine through outpatient prescriptions and the drugs could cause abnormal heart rhythms and dangerously rapid heart rate.

The agency`s announcement comes a day after the European Union`s drug regulator warned of the side effects of the drugs, urging medical professionals to closely monitor patients on the medicines. Hydroxychloroquine was also associated with potentially higher risk of death for patients at U.S. veterans hospitals, according to an analysis submitted for expert review earlier this week.

Deaths from the COVID-19 epidemic in Italy climbed by 420 on Friday, the smallest daily tally since March 19, the Civil Protection Agency said, but the number of new infections rose to 3,021 from 2,646 on Thursday. Friday`s death toll was down from 464 the day before. People registered as currently carrying the illness fell to 106,527 from 106,848 on Thursday, a fifth consecutive daily decline.

There were 2,173 people in intensive care on Friday against 2,267 on Thursday, maintaining a long-running decline. Of those originally infected, 60,498 were declared recovered against 57,576 a day earlier. The agency said 1.148 million people had been tested for the virus against 1.053 million the day before, out of a population of around 60 million.

Spain`s daily coronavirus deaths fell to the lowest in more than a month on Friday, prompting the government to declare the most acute phase of the epidemic was over as it prepared criteria to ease one of Europe`s strictest lockdowns. The 367 registered deaths in the previous 24 hours represented just a 1.7% increase overall, down from 440 the previous day, and the lowest since March 21. Cases rose over 6,700 from the day before, but the rise in new infections based on more specific testing was much lower, at 2,796, meaning those cured, at 3,105, surpassed new infections for the first time.

“We have indeed overcome the toughest phase, the most critical phase of the disease, thanks mainly to the effort of the whole Spanish society,” government spokeswoman Maria Jesus Montero told a news briefing. Although calling for prudence due to many yet unknown aspects of the virus, Health Minister Salvador Illa said the epidemic`s curve had reversed, allowing the government to plan a gradual exit from a national shutdown since mid-March. “The direction of the transition will be overseen by the government based on criteria that we will start discussing with the regions this afternoon,” he said, without elaborating.

According to Cadena SER radio, the government started to outline thresholds for further easing next month of the economically-crippling lockdown for regions with the lowest contagion rates and least burdened intensive units (ICU). For restrictions to be lifted, there must be no more than two daily cases per 100,000 people in an area, or COVID-19 patients must occupy no more than half of ICU beds.

The UK’s coronavirus death toll rose by 684 after hospital deaths were reported on Friday. While the new toll is higher on the previous day’s total by 768, the discrepancy of 84 is down to unreported deaths from Thursday by one health board in Wales. UK Transport Secretary Grant Shapps, who led the daily Downing Street briefing to provide the latest figures, said there were some “tentative signs” that Britain is making progress in its efforts to control the spread of the deadly virus as the number of hospitalisations continued their downward trajectory.

“The main reason is the way Britain has responded to the guidelines to stay at home and maintain social distancing,” said the Cabinet minister. “It isn’t over, we’re riding perhaps, we hope, a downward trend but it is by no means, no means established yet,” he said. He went on to announce a series of packages related to transport and trade, including a transport support unit dedicated to fighting the pandemic.

The measures include a trilateral agreement with France and Ireland committed to keeping freight open throughout the crisis for trade of food, medicines and other essential items, protecting ferry routes with funding of up to GBP 17 million and 26 freight routes with the rest of Europe to be protected. The minister said there is “spare capacity” because of a reduced transport service during the lockdown, with around 9,000 vehicles available to help in the fight against the virus and would be deployed to distribute packages to the vulnerable.

Taiwan is an example to the world...

Coronavirus COVID-19 lockdown 3.0 begins on May...

Do not charge railway fare from stranded...

US to have coronavirus COVID-19 vaccine by...

In a first, PM Narendra Modi to...